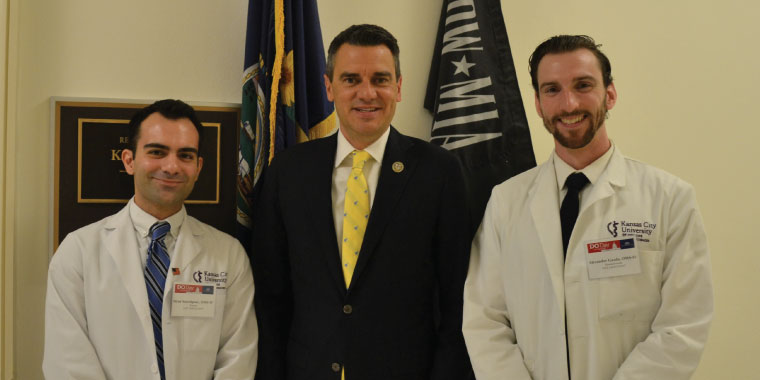 When Kansas City University of Medicine and Biosciences fourth-year medical students Sirus Saeedipour and Alec Gazda donned their white coats March 7, they were headed to Capitol Hill, not the clinic. Saeedipour and Gazda joined more than 1,000 doctors of osteopathic medicine (DOs) and osteopathic medical students in Washington, DC, for the American Osteopathic Association’s (AOA) annual DO Day on Capitol Hill. They met with elected officials from their home states, advocating for education funding and increased access for volunteer physicians to emergency care at disaster sites, while also promoting the osteopathic profession’s impact on health care.

“It was refreshing,” said Gazda, who spent time with members of the Massachusetts delegation. “They seem to want to make meaningful change. They asked, ‘What do you need from us?’”

Saeedipour met with members of Congress from his home state of Kansas and witnessed the same interest in health policy and the desire to effect positive change through legislation. “It’s surprising to me how receptive and informed people want to be, to take the time to learn and consider information,” he added.

The AOA’s 2018 DO Day dealt with two legislative issues:  reauthorization of the Higher Education Act (HEA), which provides numerous federal financial aid programs; and passage of the Good Samaritan Health Professionals Act of 2017, related to availability of and access to immediate medical care for first responders in large-scale disasters.

Since the HEA’s last reauthorization in 2008, enrollment in osteopathic medical schools has significantly increased, with many students financing their education and facing significant debt. At the same time, there has been a trend toward cutting or eliminating programs within the HEA. For example, at risk is the Public Service Loan Forgiveness (PSLF) Program, a loan repayment and scholarship program for graduating osteopathic medical students, including those who serve in rural and underserved areas facing a critical physician workforce shortage.

Federal Direct Graduate PLUS and Perkins Loans, which assist graduate and professional students in attaining advanced degrees, are additional examples. Limiting the amount borrowed, especially for those in the medical field, could jeopardize access to education, compounding the projected physician workforce shortage.

Not surprisingly, DO Day participants supported reauthorization of the HEA, noted Saeedipour.

DO Day participants also advocated for passage of the Good Samaritan Health Professionals Act. This measure would protect medical volunteers from lawsuits during a federally declared large-scale disaster, such as last year’s California wildfires and the hurricanes and flooding in Texas, the Gulf Coast and Puerto Rico. The goal of this legislation is to minimize administrative delays in delivering vital health care services often provided by medical volunteers.

In a federally declared disaster, licensing and permissions for physicians are handled state by state.  As Gazda and Saeedipour explained, this creates a less efficient system to provide the infrastructure for organizing volunteers and, in turn, help people affected by the disaster. Inconsistencies in current federal and state laws could subject out-of-state medical professionals to unjust medical liability lawsuits when they volunteer their services to disaster victims.  With the Good Samaritan legislation in place, declaring a federal disaster would automatically trigger an out-of-state waiver for physicians to quickly volunteer and get to work helping victims.

Gazda observed that, as medical students, they are “the people on the ground,”  able to provide anecdotal perspective and lend a more personal, emotional side to the issues. “Not only is DO Day a great, effective advocacy tool,” he said, “it creates a sense of unity and camaraderie within the osteopathic profession.”

Curious eyes and big smiles filled the Kansas City campus with energy as 300 children from Scuola...

The Kansas City University of Medicine and Biosciences (KCU) Joplin welcomed its second class of...