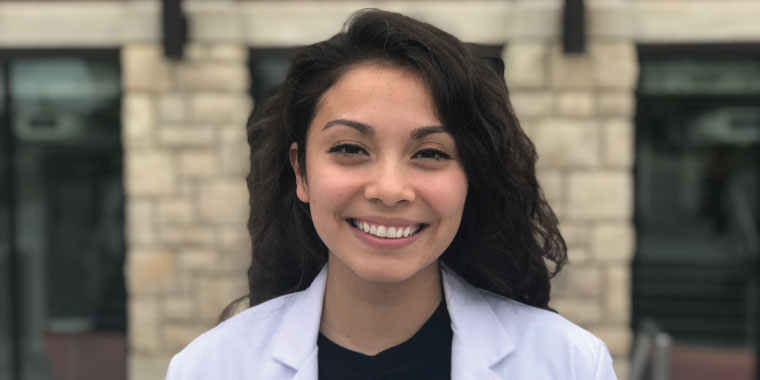 Paola Candia knows she isn’t a typical med student. She’s a minority. She doesn’t come from wealth. She has no physicians in her family. She didn’t stumble upon a storybook guardian angel who believed in her as a child.

What she does have is a dogged determination. And her mom. 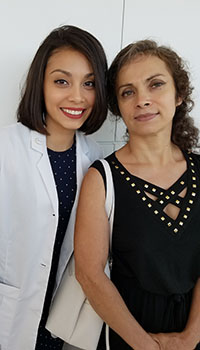 Paola is the proud daughter of is Maria Escorcia, a single mother who emigrated from Nicaragua. Maria provided for Paola, her brother and two sisters as a laborer in a tire factory and a hospital housekeeper. Despite the obvious challenges her family faced, Paola allowed herself to dream of becoming a doctor. “It’s what I wanted to do since I was little,” she said. While she works to achieve her childhood dream she wants to help other minorities do the same.

“It’s hard to imagine yourself as a doctor because you don’t see that around you,” Paola notes. “It’s important for me to reach out and show them that just because you are Hispanic or didn’t come from a certain background it doesn’t mean you can’t do it.”

Paola started reaching out as an undergraduate at Emporia State University. She worked two jobs and received scholarships to pay for a degree in biology. Despite the grueling schedule of work and study Paola found time to charter Kappa Delta Chi, the first Latina sorority in university history.

“There is a big Hispanic population in Emporia, Kan. But most don’t see higher education as an option for them,” said Paola. “I wanted to bring awareness to the Hispanic culture on campus and encourage more Hispanic students to attend college there.”

Following graduation from Emporia State, Paola earned a master’s degree in biosciences from KCU and is currently a second year student in the College of Osteopathic Medicine. At KCU, she has again found she is not the only one who questions her abilities and skills.

"We are thrilled to have Paola here at KCU,” said assistant professor Gretchen Lopez, PhD. “She is certainly prepared academically for the challenge of medical school, but we want Paola and students like her to realize they bring something special to the table. They will realize that where they have been and their life experiences will help them relate to patients in ways people from other backgrounds cannot. Paola is now determined to encourage other students who look like her to enter science and medicine — in part perhaps, because she didn’t have much encouragement herself."

Advisors in her undergraduate years actually discouraged her from a career as a physician. Her mom advised her not to listen to them and told her not to give up. “She would see me cry a lot,” Paola remembers. “She told me she would be there and that I could do it. She is pretty tough.”

“I feel it will also help with Score 1 for Health screenings, (KCU’s program that gives students clinical experience while offering free health screenings to children) since we have a lot of Spanish speaking kids. If we could give non-Spanish speaking medical students some basic sentences to talk to the kids they can practice overcoming that barrier of becoming embarrassed by not knowing any other language,” she said. “And it can bring a sense of comfort and trust to a child who doesn’t speak English.”

Paola hopes these activities will draw other students with Hispanic backgrounds to KCU. She believes more students from diverse backgrounds will enrich all students’ lives. She still combats the feeling of being out of place and inferior to colleagues because she is not the same. And she admits there are days she looks around and wonders if she belongs. But she’s coming around.

“I do feel I have a unique path and a story that needs to be told. There are other students going down a similar path and they feel the same way.  I know they can do it, just like I got here.”

Paola feels a responsibility to represent the hopes and dreams of her family and culture. And she wants her mom to see her succeed.

“My mom has been my mentor not only in medical school but for my whole life; she has taught me work ethic, perseverance and humility. Once I finally graduate as a doctor I’m going to make her proud.”

As if she hasn’t done that already.

A dramatic moment during a KCU global health trip to Kenya: a mother sat down in front of...

Kansas City University welcomed 162 students into the third class of the Joplin campus with a white...