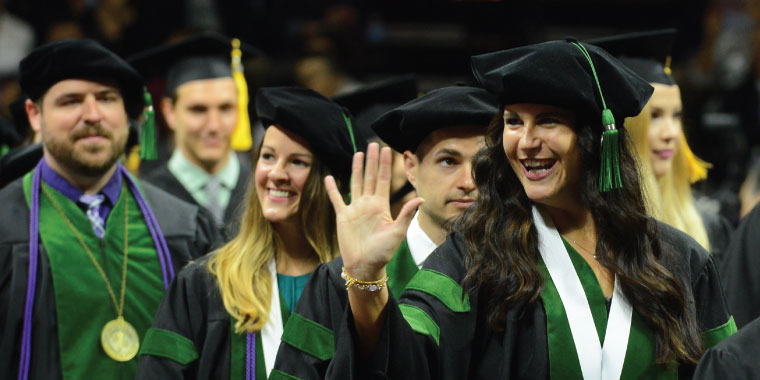 Kansas City University of Medicine and Biosciences osteopathic medical students from the Class of 2018 have ranked number one in the nation for first-attempt pass rates on the Comprehensive Osteopathic Medical Licensing Exam (COMLEX) Level 1. The National Board of Osteopathic Medical Examiners just released the national averages and rankings of 35 osteopathic medical schools from across the country, with 98.82 percent of KCU’s class passing the exam on the first attempt, compared to an average of 92.70 percent nationally; KCU’s mean score is nearly 32 points higher than the national average.

KCU Executive Dean of the College of Osteopathic Medicine and Vice President for Health Affairs, Darrin D’Agostino, DO, made the announcement, calling it “an exceptional accomplishment.”

The COMLEX Level 1 is the first in a series of three medical licensing exams designed to assess the osteopathic medical knowledge and clinical skills considered essential for practicing osteopathic medicine.

“KCU student performance on the COMLEX Level 1 continues to be highly competitive and has consistently ranked above the national average for the last four years,” said D’Agostino. “However, this year our rankings dramatically outpaced the average of our counterparts — we are extremely proud of these students.”

“Becoming the most student-focused medical university in the nation drives our vision at Kansas City University," said Marc B. Hahn, KCU president and CEO. “Our record COMLEX Level 1 scores are a testament not only to the tremendous commitment of our students, but also to the dedication of our faculty and staff to achieve that vision.”

The future of telemedicine is rapidly changing, according to David Tannehill, DO, and president of...

Score 1 for Health Receives Rave Reviews from Students of SVN