Dr. J and I: A Student & Professor From Divergent Backgrounds Built a Bond Through Compassion & Respect 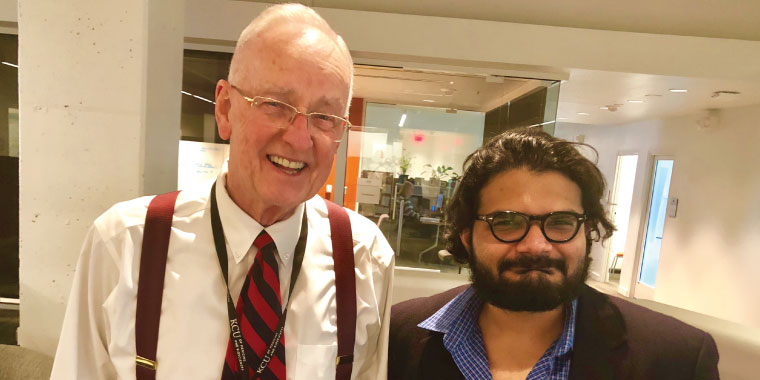 If you’ve attended KCU or have been associated with the institution at any time during the past 40 years, you know who Gary M. Johnston is. Around here, he is simply known as “Dr. J.” Around here, if you say “Dr.J,” there is no mistaking whom you’re referring to; it’s a name that is inextricably linked to Kansas City University. The “Gary M. Johnston DO Way,” on campus recognizes his decades of service to the University.

At this juncture, it’s fair to wonder what would possess me, a persnickety OMS II who is yet to earn his stripes, to even have the gall to mention Dr. J’s name next to mine. The fact is that Dr. J and I enjoy a strong and special relationship which is more a testament to the kind of physician and educator that he is, as opposed to who I am as a student or a person.

My first interaction with Dr. J was as a first-year in the fall of 2016 when he lectured to our class on cardiology and most memorably, on EKGs – the bane of every medical student’s existence (at least initially). I am the most curious person I know, and have never been shy of asking a question or several dozen. I peppered him with a string of questions, one after another, much to the chagrin of my classmates. He continued to patiently address my queries, until finally we were well behind schedule. When my hand went up one more time, eliciting a noticeable groan from the class, Dr. J still patiently and thoroughly answered my question. After he finished, he added in his patented southern drawl with a smile on his face, “Faiz, if you ask me one more question, I’m gonna slap yeh!” The class, including myself, erupted in laughter.

This incident was followed by several more where he and I engaged in friendly banter. Another incident that comes to mind took place on the first day of my second year. Our class was assembled for a mandatory meeting with the leadership. Uncharacteristically, I was seated at the back of the lecture hall. When Dr. J took the floor, he gazed over the lecture hall, looking for me. When he spotted me, he joked, “Faiz, I’ve got my anti-anxiety pills ready. I’m ready for you this year.”

“Good to see you, Faiz,” he added with genuine warmth.

But despite the different cut of our prisms, Dr. J and I have a deep and meaningful bond which is cemented in an abiding respect and admiration. If anything, our differences have only served to bring us closer to each other.Dr. J and I usually find ourselves on the opposite sides on a fair number of things. This was never more evident than at the KCU Global Social Issues Forum (GSIF) – a monthly forum for members of the KCU community to discuss difficult and controversial topics of social relevance in a safe and respectful space. I rarely demur from expressing my opinions, and I certainly didn’t make a special dispensation for the GSIF. Our disagreements were to be expected. After all, the differences between us are obvious. We belong to different generations and have had vastly different life experiences that have carved two separate prisms with which we view the world.

It’s easy to see why I and others respect and admire him. He’s clearly an exceptional physician and teacher --  a rich panoply of credits and honors attesting to this. What I admire most about him, however, can’t be adequately captured by an award or a credit. It’s his humility, compassion and dedication. His humility ensures he is never too proud to learn about life and medicine, even from whipper-snappers like me. And his compassion and dedication to medicine, which invigorates him to train physicians who are not just competent, but compassionate as well. On our last day of class with him, he left us with an emotional missive: If he had done his job, he hoped we would be better physicians than him. He was gracious enough to allow me to have the last word. I invoked this privilege to assure him that one is only as good as their teachers, and we had been fortunate to have him. Our class acquiesced by giving him a rousing ovation.

It is less clear to me why he reciprocates my respect and admiration, and far be it from me to speculate about what it might be. But I have been assured of it on more than a few occasions. Most memorably when he introduced me to his wife, and mentioned the few things he had learned from me. On another occasion, in a bioethics class, he deferred to me when it came to health policy, owing to my academic and professional background in public health.

I have had the privilege of having many outstanding mentors in my life. I am fortunate to count Dr. J among them. Our strong relationship is a testament to one of the things that makes medicine such a vaunted profession: compassion, empathy and respect will always transcend the superficial differences that divide as individuals. I haven’t and probably won’t win any awards here at KCU. But knowing that one of this institution’s finest servants sees something in me, is one of my proudest credentials.

KCU student doctor Faiz Kidwai is a 2016 graduate of Boston University’s School of Public Health. While at BU, he wrote an article about the value of a public health education. KCU spoke with Kidwai about the importance of this topic.

Acknowledgements: I would like to dedicate this article to the COM Class of 2020 and KCU’s Housekeeping Staff. I would like to specifically acknowledge Dr. Robert Stephens, Dr. John Dobson, Dr. Sarah Parrott, Ray Elliot, Dr. Alex Shnyra and N.K. – I wouldn’t have made it this far without you.

KCU began its second century of commencement ceremonies with a record. A total of 361 students from...